Congressman Troy Nehls staff, including he Deputy District Director Mary Davis, and Field Representatives Alex Chadwell and Baily Huggins were thrilled with the turnout in Meadows Place.   The Congressman is serious about communicating with his constituents and uses these ‘Mobil Office” gatherings as a place for people to come in and ask questions, leave comments or positions in a very informal but effective setting. Staff said that the turnout by Meadows Place residents was probably the largest response they have had to one of their Mobile Office gatherings!

Alderman David Mertins was working with Bailey Huggins, Mary Davis and City Staff to get this arranged. This was a great opportunity to meet directly with Congressional Staff and both the Congressman and the City want to say Thank You to all who attended. It makes both our City and our Country Stronger….. and Thank You Congressman Nehls. 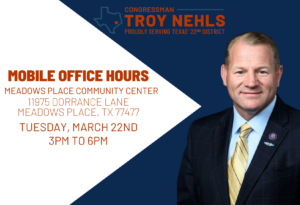 This entry was posted in Community Events. Bookmark the permalink.

Meadows Place Economic Development Corporation was created to support the development, expansion and relocation of new and existing companies. MPEDC has a mission to help create an environment where community and business can thrive.