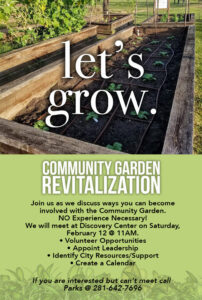 On February 12th, the Mayor and Parks Director, Colene Cabezas, met at the Discovery Center with four residents and a Community Garden board member.  The point of the meeting was to conduct a Community Garden roundtable to discuss the level of interest, and commitment, for the Community Garden and discuss possible options if necessary.    Though there was a great love for the garden, the lack of turnout was an indicator of a lack of commitment for continuing the garden as is.    All attending agreed that changes needed to be made.

Parks Director, Colene Cabezas, prepared a report for the Mayor and Council giving the results of the meeting and the plan for transitioning the garden.  The report was presented at the February Council meeting.  In summary, Bob Dybala, Vice President, suggested that he would need 20 volunteers if the community garden would be able to continue.

After lengthy discussion, it was decided that the city would assume the responsibility to maintain the beds and convert them to a butterfly garden, allowing for one bed to be used by the school if requested.

If the Community Garden group were to gain interest and volunteers to support the garden, the city will provide beds to them. In the meantime, the city will begin to maintain the beds effective immediately with the goal to make the garden area a source of pride for the city and all who live here.

This entry was posted in Community Events. Bookmark the permalink.